Let’s locate ‘Dambulla’ on the world map of (in)tolerance 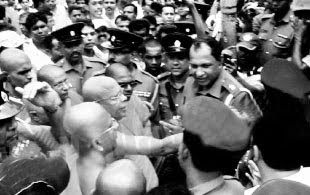 The controversy surrounding 'sacred areas' in Dambulla yielded a heady mix of the sacred and profane, powered predictably by 'religious' leaders/spokespersons. It also brought out of the woodworks the usual suspects in the time-honored vocation of bashing Buddhists and Sinhalese. That particularly selective commentariat has been waxing lyrical about Buddhist intolerance, Sinhala-Buddhist chauvinism, the sanctity of secularism and generally vilifying all Sinhala Buddhists in the country as the primary and only source of ethnic and religious disharmony and other such ills. All this, even as Buddhists, including both lay and clergy, condemned the acts of certain Buddhists and Buddhist clergy in attacking a Muslim place of worship.

It must be stated that if there was anything illegal about the mosque, then it is up to the law enforcement authorities to deal with it. If the existence of the mosque contravened some regulation, then whoever sanctioned the construction must be taken to task. If relevant acts of parliament are unclear about what to do with places of worship or any other building located in an area zoned as 'sacred' or of archaeological interest prior to the selfsame act coming into effect, then that piece of legislation needs re-visitation and amendment. There should be clarity about what constitutes 'place of religious worship', for people can and have set up 'prayer areas' (which could be anything from a room in a building to a prominent mosque or church) which are used without any fanfare and out of the public eye, allowing for later claims that 'This existed for decades'. If objections went unheeded and led to unfortunate and violent incidents, then part of the blame must accrue to those who turned a deaf ear.

Silent about encroachment
Regardless of the validity of objection, the act of objecting must be legal and, in this case, affirm and not contradict the teachings of the Buddha. Where compassion and reason are footnoted or ignored and in their place hatred and emotion come into operation there is nothing 'Buddhist' about it. Rather, it refers to anxieties that are this-worldly, transient and placed in the middle of cultural-religious politics that have nothing to do with doctrinal tenet. It is not an indictment of either doctrine or true follower, just as fundamentalists who burn, plunder and kill in the name of Jesus Christ or Allah can hardly be claimed to be adherents of those teachings or their acts sanctioned by the word of their teachers.

Lost in the vilification game, naturally, is context. The selectivity and its pernicious character is evident in the fact that the aforementioned commentariat has been conspicuously silent about encroachment by Muslims of places of historical, archaeological and religious significance to Buddhists. The ancient Buddhist shrine at Kooragala is a case in point. The encroachment of lands belonging to the Muhudu Maha Viharaya, a place of immense archaeological importance, is another.

Let's call that our General Sri Lankan Screw-Ups. Let's move to places from which people are pointing fingers at Sri Lanka and especially Sinhala Buddhists and engaged in endless and foul-mouthed name-calling. Karunanidhi forgets what Hindus do to Muslims in India, but he's just an also-ran in Tamil Nadu and a desperate political refugee. Let's go further. To Europe.

Let's begin with Switzerland. In November 2009, there was a referendum on a constitutional amendment banning the construction of new minarets. It was approved by 22 out of 26 Swiss cantons. The referendum followed an initiative by the Swiss People's Party and the Federal Democratic Union, the former maintain that minarets are 'political symbols' and designing fliers that featured a veiled woman against a background of a Swiss flag pierced by several minarets resembling missiles.

To preserve heritage
They may have been 'extremists' but the Swiss people supported them. None of them would say that a church steeple was a 'political symbol', never mind the fact that 'Christian Politics' moved them to do what they did and that the cross has both ecclesiastical as well as crass political meaning. What was 'politically relevant' was the claim that Christian churches would not be allowed in the Arab world. That 'sauce for goose and gander', for some reason, is not considered applicable to Sri Lanka.

In 'democratic' Europe, from Norway to Italy, from Portugal to Austria, the religious building landscape is monolithic: if one travels from Oslo to Napoli and from Lisbon to Vienna, one would see only Christian churches along the way. Muslim places of worship are confined to apartments in flats in all these countries, despite having considerable Muslim populations and despite the fact that current growth rates indicate that Muslims would form the majority of most European countries. Still, no mosques would be allowed around the areas surrounding major cathedrals in Europe. No mention of 'intolerance' here.

There's more to 'secularism' in Europe. I am thinking of the French Revolution and all the secular rhetoric at the time and since. France has public holidays, like any other country. France has 5 civil holidays: January 1 (New Year), May 1 (Labour Day), May 8 (End of WW II), July 14 (Bastille Day) and November 11 (End of WW I). Surprise, surprise, France has 6 more 'secular' holidays: Easter (sometime in April), August 15 (to celebrate the Assumption of Mary), November 1 (All Saints' Day), a Thursday in Mid-May (39 days after Easter, to celebrate Jesus' Ascension), Pentecôte (50 days after Easter, usually on a Monday by the end of May) and of course December 25 (Christmas). And just the other day, France's lower house of Parliament overwhelmingly approved a bill that would ban wearing the Islamic full veil in public. Nothing 'wrong' there, but everything that Buddhists do in Sri Lanka to preserve heritage is wrong, and I am not talking about excesses by un-Buddhistic 'bikkhus' but even the articulation that questions the validity of multi-religious (i.e. one religion, one-vote logic) descriptive given population disparities and historical facts.

Now compare European 'tolerance' described above with the landscape of Sri Lanka, if you travel from Jaffna to Matara or from Colombo to Batticaloa. All places of religions worship, whether Islamic, Hindu or Christian are of the traditional architecture of each religion. Despite the violence unleashed in the name of Christ, including the destruction of Buddhist and Hindu temples and wide scale book-burning, the adherents, their right to worship and places of worship were not only allowed by the victims of that violence but were also treated with utmost respect utterly disproportionate to the kind of 'respect' meted out to Buddhists and Buddhism by 'Christians'. Muslims know that it was the largesse of a Buddhist king, Senarath, that spared them from being massacred by 'Christian' Europeans.

Division along ethnic lines
The invective of fundamentalist Muslims reacting to the Dambulla incident, similarly, is hardly representative of the entire community, which has for example, opposed the division of the country along ethnic lines, a 'political' need that is of great significance to Buddhists, the vast majority of whom are Sinhalese.

Just to illustrate the slant in the commentariat ranting and raving about Buddhist intolerance, I am awaiting some word, any word in fact, from that bunch about Ven Ampitiye Sumana Thero's abduction. The Venerable Thero of the Mangalaramaya was abducted and manhandled by some TMVP members, taken to the Wellavali PS Chairman's office and threatened. He was told 'The East belongs to Tamil'. In this context, should Sinhala Buddhists even entertain proposals that grant land and police powers to provincial councils, one can ask. Anyway, the abducted was a Buddhist, a member of the Maha Sangha. Silence from the anti-Buddhist commentariat that talks of religious tolerance, secularity and so on.

Now what if anything like this happened to a member of the Islamic or Christian clergy? Someone offered that 'not only the entire Muslim community and the entire Christian community would be up in arms in one voice with all the human rights activists et al. with Al Jazeera and BBC taking this all round the world calling for a regime change, etc.' He added, 'the Cardinal would walk into the President's house and threaten that unless immediate action was taken he would boycott all government functions and the President would simply cow down'.

There's inequality here, clearly. That 'inequality' which refers to the disingenuous politics and global political economy of religion speaks of both tolerance and intolerance. Today is Vesak, and it is best to point these things out in the interest of reason. And so I conclude that if we are to see reason and tolerance triumph, we must understand anxiety, we much acknowledge history and heritage, we must be conscious of context and proportionality.
msenevira@gmail.com